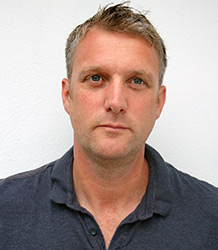 Oliver Creighton is Professor of Archaeology at the University of Exeter.

Prof. Creighton's research and publications focus primarily on the archaeology of medieval Britain and Europe (for a list of key books, book chapters and articles, click the ‘Publications’ tab). Oliver’s work has a strong interdisciplinary dimension and he has a particular interest in medieval elite culture, buildings and landscapes. He has published widely on medieval castles and their wider social and landscape contexts, as well as other fortifications, including town and city walls. Oliver is also interested in the archaeology and history of designed landscapes, towns and townscapes, and in conflict archaeology and medieval warfare.

Oliver is currently the Principal Investigator for a major AHRC-funded project on the archaeology of medieval warhorses: for the project website see: http://medievalwarhorse.exeter.ac.uk/

Oliver Creighton researches and publishes in the following fields:

Oliver has a long-term research interest in the study of medieval castles within their broader landscape and social contexts and in the impact of lordship upon society and landscape.  His first book was Castles and Landscapes (2002), now available as a second edition (Castles and Landscapes: Power, Community and Fortification in Medieval England, 2005) in paperback.

A more recent publication that explores the wider European context of early castle building is Early European Castles: Aristocracy and Authority, AD800-1200 (2012). Oliver has also published a concise guide to the subject with R.A. Higham, Medieval Castles (2003), as well as numerous other journal articles and papers in edited volumes. He continues to pursue new approaches to the study of castles, with particular emphasis on their social and symbolic roles.

A linked research project, funded by a Leverhulme Trust grant, was the first ever archaeological study of the 'Anarchy' of King Stephen’s reign on the landscape. This has produced two books: The Anarchy: Conflict and Landscape in 12th-Century England (2016) and Castles, Siegeworks and Settlements: Surveying the Archaeology of the Twelfth Century (2016), as well as a series of journal articles. Read a blog on these publications here.

Oliver is the Principal Investigator for a major AHRC-funded project on the archaeology of medieval warhorses: for the project website see: http://medievalwarhorse.exeter.ac.uk/

The phrase ‘designed landscape’ is generally associated with the great parks and gardens of the post-medieval period. But can the concept of landscape design by traced back before the Renaissance? Oliver’s 2009 monograph Designs upon the Land: Elite Landscapes of the Middle Ages explores how elite landscapes of the medieval period were manipulated for reasons of leisure, pleasure and visual impact.

The archaeology, heritage and social history of town defences is another central theme within Oliver’s research. Along with Exeter colleague Robert Higham, Oliver published the first volume of research on the subject for over thirty years, Medieval Town Defences: A Social History and Archaeology (2005).

Oliver was also a co-director of a major AHRC-funded research project that investigated the historic townscape of Wallingford in Oxfordshire. Working with the Universities of Leicester and Oxford, the project culminated in the 2013 volume published in the Society for Medieval Archaeology Monographs Series Transforming Townscapes. From Burh to Borough: The archaeology of Wallingford, AD 800–1400. Oliver is interested in the origins and functions of open space within medieval towns and led the first ever geophysical survey of Exeter's Cathedral Green.

Oliver also researches in the field of archaeological heritage management, with a particular interest in buildings and landscapes. He co-directed the AHRC-funded project Community and Landscape: Transforming Access to the Heritage of the Poltimore Estate. Running from 2010–12, this knowledge exchange project promoted public involvement with the rich and multi-layered heritage of a country estate in the Exeter region. Learn more about the Poltimore House Trust by following this link.

Oliver is currently first supervisor for the following research students:


Oliver has supervised the following students through to completion:


2019: Richard Parker, PhD, Nineteenth-century Churches, Church Furnishings and Church Restoration in Devon, 1800-1939: A Study of the Impact of the Ecclesiological Movement in an English County.


2019: Mandy Kingdom, PhD (second supervisor), The Past People of Exeter: Health and Status in the Middle Ages.


2018: Richard Nevell, PhD, The Archaeology of Castle Slighting in the Middle Ages.


2017: David Gould, PhD, Mutually Assured Construction: Æthelflæd’s burhs, Landscapes of Defence and the Physical Legacy of the Unification of England, 899-1016.


2017: Madeleine Knibb, PhD (second supervisor), Speaking for Themselves: The Significance of Field-names in Understanding a Diverse Historic Landscape in Somerset.


2015: Gill Cobley, MPhil (second supervisor), Devon's Antiquarians: Identifying what has been Lost from the Archaeological Record.


2011: Michael Fradley, PhD, The New in the Old: Urban Castles in Britain.


2011: Martin Goffriller, PhD, The Castles of Mallorca: Territorial Control on an Islamic Island.

In terms of fieldwork, Oliver has a particular interest in archaeological survey, including earthwork survey and geophysics, and has worked extensively in the UK as well as in Italy, Spain, Jordan and Libya.

Oliver contributes to teaching in the Department at all levels, from first year Undergraduates to Masters students. His teaching covers British archaeology, aspects of archaeological methodology (such as geophysics and landscape analysis) and specialist thematic modules on medieval castles and the social archaeology of medieval Britain. He also teaches on the Masters in Medieval Studies.

Oliver was elected elected as a Fellow of the Society of Antiquaries of London in 2006.